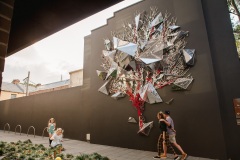 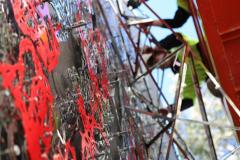 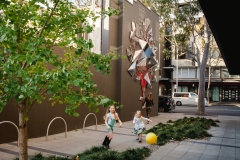 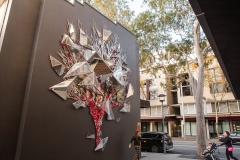 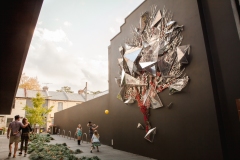 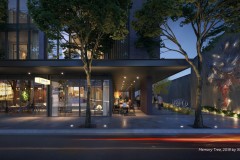 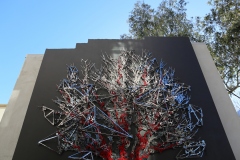 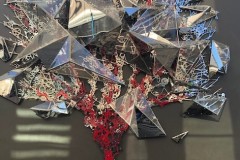 Referencing the wheels of industry that dominated Ultimo’s past, now stands a tree of life. On this site, stood the original Bushells Tea & Coffee factory and warehouse from 1920 – 1964. It typified Ultimo’s important industrial identity – one that powered NSW into the 20th century. When Bushells relocated a new TAB headquarters was built here where for 50 years State run gambling was administered. Beijing artist Xia Hang, uses the tree with its rich red veins, to breathe new life into Ultimo.

Xia Hang has never let go of his boyish sense of play, imaginatively disassembling and re-assembling things like insects, plants and machines. His intricate stainless steel sculptures conjure up childhood memories of puzzles, Legos and transformers. Like a complex 3D jigsaw puzzle, there are over three thousand parts to this work. Maintaining the interactive spirit of build-able toys, the sculpture can be disassembled and its parts assembled again to create the piece. A more reflective approach to the process of his making Xia Hang reminds us ”that when you dismantle a temple, you are nearer to Buddha”.

Memory Tree captures Ultimo’s past and present by referencing two local interpretive themes – the area’s important industrial past and its transition to a new residential area.

This work originates from an amalgam of two different bodies of the artist’s work – one as a result of a commission from Swiss watch maker Maximilian Büsser in 2015, which Xia Hang immediately followed with a series of wall sculptures in 2015-16, that captured the brilliance of the human heart and lungs, depicting them as intricate Swiss watches. It was this body of work which drove my selection of Xia Hang.

The site – a new laneway with a somewhat brutal northern wall designed to buffer adjacent residents, as well as holding up the heritage terraces, spointed to a wall sculpture as the obvious direction for a public art work. Xia Hang responded well to the suggestion of a tree – as ‘the lungs of the world’ it is a life sustaining organ in an urban area. Memory Tree, with its blood vessels coursing through 3000 shiny silver mechanical parts, is both an organic and metaphysical depiction of a symbol that sustains life.

The 26 tetrahedron leaves add depth to the work, and create a myriad of reflections as day light dances across the space. Carefully considered night lighting renders a different appearance again, with Memory Tree transforming the laneway into an activated social space for the Ultimo community.

A Ginkgo tree – symbolizing longevity (the tree can live for a thousand years and of a more profound endurance four ginkgos survived the blast at Hiroshima and are still growing today), has been intentionally planted next to Memory Tree. The Ginkgo tree is an object of veneration in the East, a sacred tree with healing qualities, bearer of both hope and the immeasurable past.